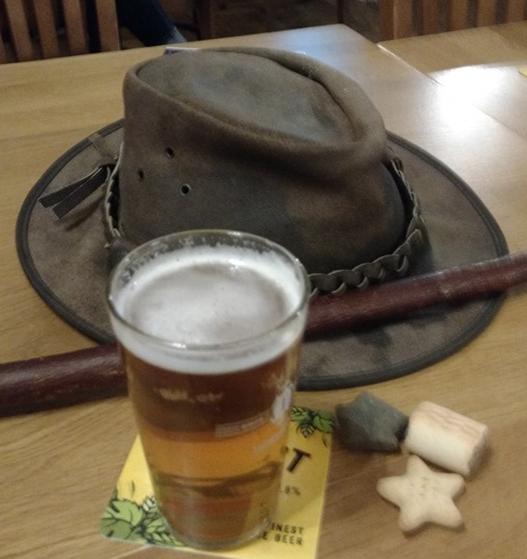 American IPA from Wadworth. Now there's a name to conjure with.

“That Max is because your only twelve and not well travelled. Wadworth’s is a Wiltshire beer...”

“I thought” said Max, "that you said, that I was eighty four on my last birthday.”

“Well in dog years yes but you are only twelve in human ...”

“And I’ve been every where you’ve been for those last eighty four years?”

“Yes but I’ve not been much abroad either these last twelve...”

“Well eighty four to you Max but only twelve for me.”

“Have we been in each other company for the same length of time or not?” said Max.

“And has that length of time been my whole life?” said Max rather irritably.

“Er, yes I suppose it has, bar the first twelve weeks.”

“What? You probably don’t remember Max, it was only twelve weeks before...”

“My memory is fine." said Max. "I am just trying to be consistent. If twelve years is eighty four years then twelve weeks is eighty four weeks, which I think you'll find is more than eighteen months.“

“Nobody likes a smart arse Max.”

“Because” said Max “every time we go to the pub and I mean any pub that we go to, someone, and as often as not some two or some three, says what a splendid dog I am and more often than not, they proceed to behave inappropriately which I do like, whereas I am pushed to remember a single occasion when anyone, and that is any one, singular, numero uno, has given you so much as the time of day, still less behaved inappropriately.”

“Ok Max, You’ve made your point, you are a handsome brute.”

Well it does sometimes feel like it Max. The last time I was in Wiltshire I was working for the County Council and Suzie was with me.“

“Suzie was a thoroughbred Max, if thats what you mean, registered with the kennel club and everything.”

“Yeeees” said Max slowly, “and I suppose she knew all about Wadworth’s?”

“I’m not sure she did Max. Unlike you she was a drinker but she stuck mostly to Young’s ordinary.” I was in reminiscence mode now, ”She fell in the Lea one night after a drink or two in the Prince of Wales, only a pup at the time.”

“Not eighty four then?”

“And she could remember her own name?”

“And the names of old friends too?” said Max.

“I expect so” said I, feeling rather embarrassed.

Max was silent for a while.

“Did she like dog treats in the pub?” said Max.

“They didn't do treats in the pubs then Max.”

“Well they do now” said Max, “and I think in dog years I probably haven’t had one for at least a month and a quarter“