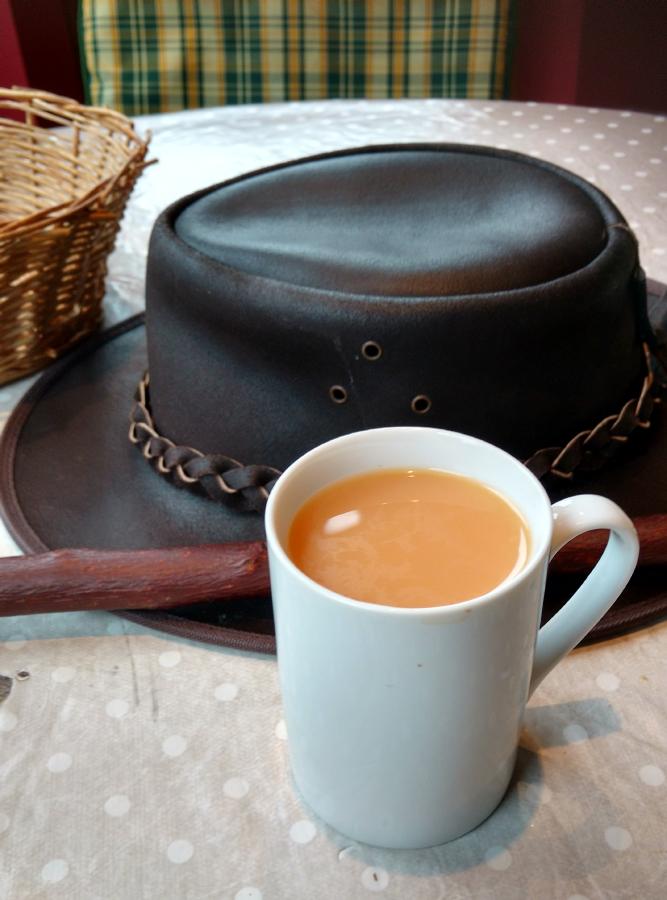 "I thought" said Max "that you approved not of decaffinated products."

"Too true, but it's not decaffinated Max, it is naturally caffeine free and satisfies the requirements of the quacks as well as my taste buds."

"And does it" said Max "come with biscuits?"

"A horrible word either way" said Max, "but the point I'm making is that the vittles this morning include neither beer nor biscuits."

"You can hardly expect me to drink beer for breakfast Max, that would be horrible."

"I don't see why" said Max. "I'm sure beer tastes the same at 8am as it does at any other time of the day and I can guarantee that the taste of biscuits is not temporally determined."

"You can't for goodness sake expect me to start drinking beer at 8 in the morning?"

"I thought" said Max "to find you more willing than this to make sacrifices for your art. I, the noble hound, am prepared to endure such trials on your behalf."

"Max this is a cynical ruse which you are employing in order to get treats at breakfast time, you care nothing in reality for the veracity of my... my bee log."

Max was silent for a moment or two then...

"Don't we usually go for a walk on Sunday mornings" said Max, "Rather than sit about drinking Rooibos?"

"We do Max, and we will but I just wanted to catch up on this first."

"What is what about?"

"Don't be obtuse", said Max "the play you saw yesterday, the thing you're writing about now, What was the play about?".

I might have queried Max's perspicacity but I usually know when I'm beaten.

"It was a lovely building Max, very ancient beams, a curious layout with the bars upstairs and the auditorium down, but a lovely space, very intimate, rather like the pub theatres in London's East End."

"I expect it still is," said Max sardonically, "but leaving aside your cavalier use of tense, what I am enquiring about is the theme of the play you were supposed to be watching, not the architecture."

"The thing is Max, I'm not really sure."

"No clue in the name then?" said Max.

"Well it was called 'Consent' and certanly questions of consent were raised, both in the case of woman called Gayle who is the victim in a rape case and in a possible domestic rape by Edward (the defending counsel in the rape case) but they seemed to be factual questions rather than conceptual and I couldn't really say that that is what it was about. It seemed more to be looking at contemporary hetrosexual relationships amongst the well healed legal proffession, 'Modern Love' if you will.

Max looked at me quizzically.

"I can tell you the plot if you'd like?"

"Will it take long?" said Max.

"Not really, you see there are two barristers and their wives, who are all close friends and meet up regularly to exchange sexual expletives and who tangentially discuss their current cases.

"The trouble starts with Jake, a serial philanderer, trying to save his marriage to Rachel, who I think is also a barrister. After leaving for a while Rachel get's back together with Jake, with the good offices of Edward, who also has an affair, even though he has just had a baby with his wife Kitty. Not sure of the time line but Kitty wants revenge. She, Kitty, and Edward have been trying to get Zara, a would be actress, off with another mutual friend, Tim, who is the prosecuting counsel in the rape case.

"Zara is clear that she has no interest in Tim, but when Kitty has an affair with him which turns into 'Love' and moves in with him, it appears that Zara is pushed out."

"Kitty leaves Edward and tries to get custody of their child. Edward rapes Kitty. Kitty gets back together with Edward at the very end (I think although it is not explicit) and Zara gets back with Tim. It's all done with explicit sexual dialogues peppered liberally with sexual expletives.

"Oh, oh, Gayle is reported as having committed suicide and it also emerges in the arguements between Kitty and Edward that although she knew Edward was desperate for another child, she had had an abortion without talking to him first."

"What" asked Max, with unecessary emphasis, "was the point that the playwright was trying to make?"

"I'm not sure there was one Max. The unpleasant charade of the adversarial court system is highlighted in the rape case but there is no consideration of what might be better and it was rather relegated to a subplot. The main story seemed to be that people in the legal profession and their acolytes behave abominably to each other and barely ever cease swearing."

"On the face of it, it does seem to lack a critical denouement" said Max.

"Well I suppose I might have missed something, I don't want to be unfair to Ms Raine"

"Seems possible to me" said Max "I think we all would have to agree that your not the brightest light on the tree."

"That is unkind Max, I just can't see what I might have missed, or when."

"The cast lined up at the front of the stage, the lights came on and they all bowed."

Max put his head on the floor and covered his eyes. He does that often theee days and I'm not really sure what he means by it.

"If you've finished your Rooibos" said Max, "do you think we could go for a walk now, and perhaps get a proper drink, maybe somewhere that they have dog treats?"